Mass Shootings and Band-aids – The Symptom Vs. The Cure 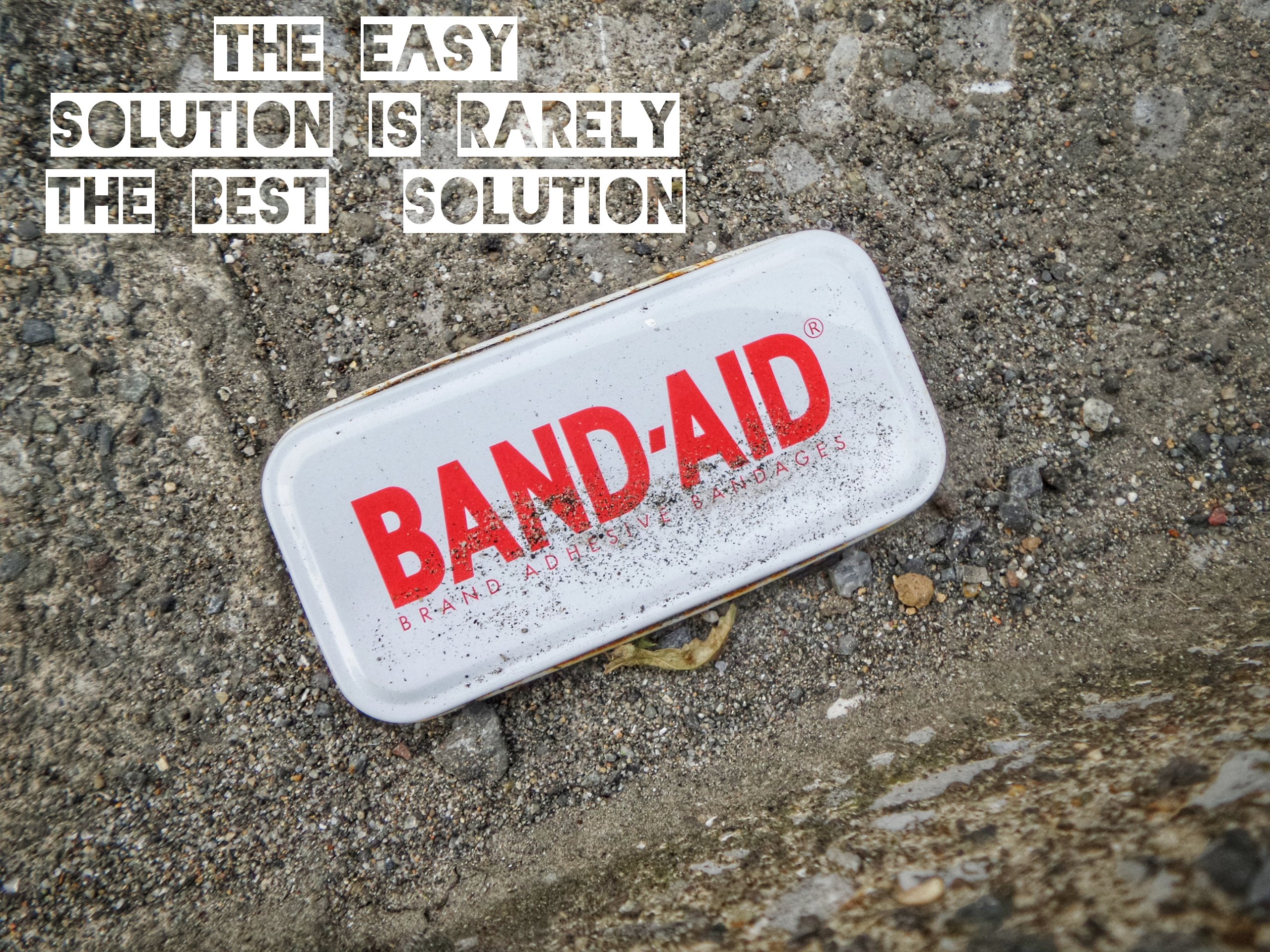 Another mass shooting. More people are pointing the blame at this thing or that thing. It’s the gun laws. It’s the video games. It’s the hatred being spewed by one politician or another. In all of these arguments, there is a common vein: they are all easy to fix with a law, a ban, or an impeachment.

Would any of that fix the brokenness? I don’t think that it would. Would making it harder for certain people to get guns limit the number of mass shootings? I believe that it would. But, that’s just fixing the symptom, not curing the sickness. That’s like taking prescription medicine for migraines and ignoring the hole in the back of your head.

The problem we face goes much deeper than guns; it goes to the very core of who we are as people. We’re fundamentally flawed in ways that prevent us from getting better. If we keep ignoring the root cause because it’s too hard to tackle, then we’re just ignoring the why. In other words, we’re neglecting the gaping hole in our heads for the quick fix of band-aids and pain meds. Sure, it might make you feel a bit better in the short but will eventually kill you if left unattended.

So, what is the fix? First, we have to change the way we think. We have to transition from a life of constant competition and comparison to one of contribution and collaboration.

We have to understand that we all want the same thing. We all want love, security, and belonging. We just go about it differently. We may not agree on the how but we can all agree on the why. Knowing our similarities won’t fix things overnight, but it will give us a place to start. It gives us a common language in which to converse. It’s a platform that’s big enough for all of us to stand on; it can bring us together.

Secondly, we need to understand that as a society, we lack compassion. It’s easy to see the world through our own filters. After all, each of us has our own experiences and likes, dislikes and opinions. All of these things together filter the way we see things. Sometimes, it’s hard to get past the preservation of self and focus on the preservation of the whole.

A change in perspective of this magnitude requires a fundamental shift in the way we see things. It goes against the subconscious ideal of survival at all costs. But, if each of us works towards grasping the concept of oneness and see each other as parts of the whole, then we begin to understand better the collective consciousness of society and how together we’re better and divided we’re more susceptible to corruption, depression, and mass murders.

Lastly, the family is broken. Divorce rates are sky-high. Kids are being raised by single parents. Spouses are neglecting their marriages for work, entertainment, time alone, drugs, and other people. The same could be said about parents and their children. There isn’t enough time spent on becoming a family unit. More and more time is spent apart, pursuing individual goals.

Kids are being raised by Facebook, Instagram, and Reddit. As parents, we need to have a plan for raising our kids or someone or something else will, and you know what? You won’t like the plan. Not at all.

I know all of this is hard. Real change always is. That’s the reason why we look for the band-aid solution because it’s easy and makes us feel good. We’re like the little boy who skinned his knee. The one who cries and cries until his mom puts a band-aid on his knee. It doesn’t fix the problem, but it makes him feel secure.

So, do what’s hard because it’s what’s right. Don’t fall into the trap of thinking that one isn’t enough to make a difference. You’re enough. Swimming upstream may be tough, but you’ll grow stronger the further you swim. Fight for US.